Where do you think they come from?

Where did the fish your aquarium come from? It's actually one of those questions that could have more than one right answer.

Every fish you keep in your aquarium, or those fishes' ancestors, come from a creek or a river or a lake or a coral reef (if you have marine fish) somewhere in the world. This is true even for fancy fish, like those bubble-eyed goldfish or veil-tailed guppies that have been bred for many years (or even centuries) in fish tanks and ponds and now don't look a lot like their great-great-great grand parents. Finding out where in the world your fish originally came from can be fun and interesting, but you might need a good book or the internet. You could go searching the world yourself, but you would need a hat and a lot of lunch money. Try not to get lost and look out for crocodiles!

Let's grab a map of the world (here's a nice one) and choose a few fish to start our research – we'll stick with some favorite freshwater tropical fish for now - the Zebrafish, the Angelfish and the Clown Loach . The only other thing we'll need is a good aquarium fish book or an encyclopedia. We'll start our research on-line by using Wikipedia.

Go to Wikipedia. In the top right of the page is a search box. Let's type “zebrafish” and click on the little search icon (the magnifying glass).

You should be taken directly to page about the zebrafish which has a first paragraph that starts:
“The zebrafish (Danio rerio) is a tropical freshwater fish belonging to the minnow family …...”

That's what we want! There really is only one type of zebrafish and it's scientific name is Danio rerio. (If you need to brush up on what scientific names are all about, you could read the article on this website called Scientific Names – or why fishkeepers sometimes sound like they are from Mars – but not now! We're in the middle something important.) 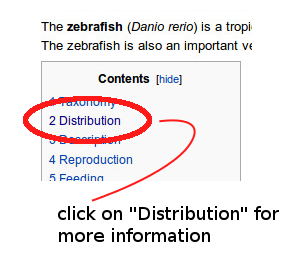 The next sentence in that first Wikipedia paragraph also starts with something we need to know for our research - “Native to the Himalayan region …..”. OK, now you may already know where the “Himalayan region” is but let's say we don't know. If you look at the “Contents” box on the Wikipedia page (just below that first paragraph), you'll see that the second item in the list is called “Distribution” - that should tell us more about where the zebrafish comes from. Click on “Distribution”.

And right there at the start of the paragraph is what we've been hunting for:

“The zebrafish is native to the streams of the southeastern Himalayan region, and is found in parts of India, Pakistan, Bangladesh, Nepal, and Burma.”

Check on your map where India is (its the triangle shaped country to the North-west of Australia. The “Himalayan region” runs right across the top of India and the countries next door – Pakistan to the west, Nepal to the north and Bangladesh and Burma to the east.

That was easy and now you know where zebrafish come from.


Let's try another one – Angelfish.
You can use the search box at the top of the zebrafish Wikipedia page. Just type in “angelfish” and click the icon to search. Do it now.

Oh dear! We haven't got an “Angelfish” page like we did for the zebrafish, we've got a long list of dot points that starts with the words “Angelfish may refer to:”

Why did that happen? Well, it's because the word “angelfish” is used for a few different different things, not just our freshwater aquarium angelfish. Look at this list. There are several fish called angelfish and even a “a short-lived Scottish alternative rock band”, whatever that is.

I think we can be pretty sure that the angelfish we want is the first one on the list - “Freshwater angelfish, tropical cichlids of the genus Pterophyllum”. If you have an aquarium book handy, just check that the scientific name for our aquarium angelfish starts with the word “Pterophyllum” (which is pronounced “terra-fill-um”, by the way). Click on “Pteraphyllum” anyway.

We get taken to a page for “Pteraphyllum” which starts with the words:

“Pterophyllum is a small genus of freshwater fish from the family Cichlidae known to most aquarists as "angelfish".”

OK, there's a few words there that might be new to you, but you get the idea. What that sentence tells us is that there is group (“genus”) of cichlids (“family Cichlidae”) that fishkeepers call “angelfish”. Sounds like this is what we are looking for and the picture over on the right side of the page certainly is the right fish. But the next sentence is the one we want:

Find South America on your map. Those rivers are REALLY BIG and fill up most of the northern half of South America.


So that's two fish we know about. Try the next one yourself – start by typing “clown loach” in the search box.

How did you go? Did you find out that the clown loach comes from Indonesia (which is just near Australia on your map). Were you able to find the two islands it is found on?

Congratulations! You are now a qualified junior “Biogeographer” - which is the name for a scientist who studies how animals and plants are spread around the world.

You could do a few more – try finding out where your own aquarium fish come from.

Maybe you can also find some books or other websites that talk about where fish come from. Or get a map and put some sticky notes on it and write down the names of fish that come from different countries. Fish biogeography can be a good topic for a school project too.